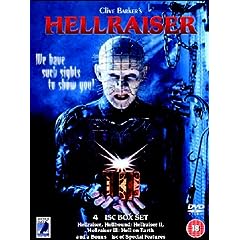 Hellraiser (1987) is based on a book written by Clive Barker. The IMDB plot summary for Hellraiser states "An unfaithful wife encounters the zombie of her dead lover, who is being chased by demons after he tampered with one of their gateways to Hell"... but that is far too simple a description of the majestic, beautiful and tragic story of the Cenobites. The action is psychological and symbolic, the demons are real, very much acting in the real world but also limiting their direct affects mostly to those who are directly dealing with them. They want only those who first desired the demons.

Hellraiser 2: Hellbound (1988): "Doctor Channard is sent a new patient, a girl warning of the terrible creatures that have destroyed her family... " (IMDB). Kirsty, after escaping from Pinhead, only has a short reprieve before she discovers that the psychiatrist who took her in is deeply interested not in her recovery, but in the Cenobites. He is a demonologist, and summons back pinhead, whereupon he is shown the Escher-like labyrinth world that the demons inhabit, and their awesome, godly master, Leviathan. The innocent girl who is tricked into opening the box is not harmed at first by the Cenobites, whose leader Pinhead declares "It is desire that summons us, not hands" and proceeds to ignore the girl and finds the psychiatrist.

Hellraiser 3: Hell on Earth (1992). Pinhead, with the unholy Leviathan destroyed, goes into hiding inside an evil pillar, patiently awaiting chances to enter the real world properly and openly. A hedonistic, lustful young man does the final summoning, and pinhead is unleashed. The theology and demonology goes to hell a bit; the second half of the film is a pseudo-action film between the heroine of the film and the Cenobites. The twists and turns of the film are interesting. Notable scenes include the wholesale slaughter of hundreds in a nightclub, and the infamous church scene where the female lead character escapes into a Church, and pinhead confronts the priest with a small sermon of his own.

Throughout the principle films above (not so much in the extended series), Pinhead gives awesome and well-written diatribes on pain, humanity, suffering, the meaning of pleasure and pain; his teachings, beautiful words and priestly demeanour are what make the films. The demonology of Hellraiser 1, 2 and Hellraiser: Inferno is interesting and unique.

Hellraiser 4: Bloodline (1996). This broken film depicts the creation of the box, the trapping of a demon by a Human demonologist, and the building created in Hell on Earth when the female lead tries to hide the box in the foundations of a building site. The fascinating building is covered in the designs of the Box, and its creator, his wife and child are held prisoner within it. The film concludes with scenes in the future, in a space station, showing how pinhead is captured forever within a binding anti-box of light. This film has an innovative dog-cenobite, but is overall poor and has a poor sense of completion. Pinhead delivers good speeches about suffering and pain to some security guards and to another female demon.

“Hellraiser Inferno is an awe-inspiring, beautiful, horrific, wonderful and engrossing hellraiser movie... a real, dark look at the soul of a materialistic, corrupt cop who has given his life over to delights and pleasure, and who then thinks he is pitting himself against pinhead... when all he is really doing is living in hell.”

The films are about indulgence. If you indulge, without foresight and without restraint, you will destroy yourself, and the cenobites are the tools of that destruction, and the methods by which you learn that it is true: Human desire has sensible restraints that shouldn't be crossed!

The Church of Satan states that "Satan represents indulgence, instead of abstinence!" as its First Satanic Statement. In this respect, pinhead and the desires that unleash him are Satanic. But, the sensible pro-Human refrain to the First Satanic Statement is "the difference between indulgence and compulsion. Indulgence can be controlled, compulsion controls". Hellraiser is the story of people who cross this line and destroy themselves and those around them. Satanism, along with the teachings of pinhead on desire, are the portals through which we can learn where these lines of self-destruction are, and learn to stay within them for maximum indulgence combined with a graceful life, as opposed to self-destruction.