Brexit is invalid because the 2016 referendum on the UK's membership of the EU was faulty and failed democratic standards of execution. Here are the reasons why:

1. The Narrow Margin Was Not Enough to Force Brexit Upon the Unwilling 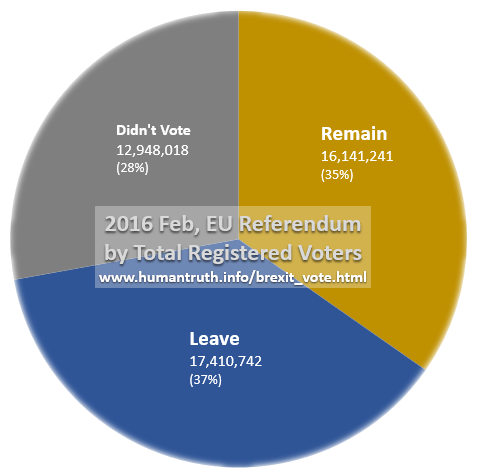 There is no single "will of the people" unless the majority is clear and large. This was not the case with the 2016 referendum on Leaving or Remaining in the EU. There was no clear victor in that vote. To make such widespread changes to a country, you need more than a slight majority. This is to protect the country from actions that cause division and instability. There are many highly vocal Leave activists who do not understand why democracies are protected in this way, but there are some that do.

Before the 2016 referendum, a UK petition was created, supported and popularized by the Leave campaign: Over 4 million signed it. It argued that if the majority was less than 60%, then, the referendum was not a valid display of the will of the people. Of those who voted Leave or Remain, only 52% voted Leave. The Leave Campaign very quickly forgot that this Petition had existed and forgot how democracy works, preferring instead a simplified and dangerous version of rule-by-majority - the kind of "democracy" that quickly destabilizes into popularist intolerance, sectarianism and violence.

In democracies, constitutional changes or other endemic changes to the national structure, first require a super-majority or a unanimous agreement of all regions. This is designed to prevent division, sectarianism, violence and popularism being a destabilizing force: democracies must be protected against short-term or fragmentary movements that have temporary appeal, but which damage the country in the long-run.

In the 2016 referendum, only half of the UK's four nations voted to Leave12. Northern Ireland voted to Remain by 56%, and Scotland by 62%. To leave in a democratic manner, all four nations had to vote to leave.

242 Constituencies (of 648) voted to Remain12. The UK has 14 overseas territories, such as Gibraltar: These voted by 96% to Remain in the EU, as did locations such as the Shetland Islands and Orkney Islands.

This makes withdrawal from the EU undemocratic, supported only by mainland Brits, not by the rest of the UK. 87% of all Brexit voters were in England. It is not democratic for a single bloc of England and Wales to force Brexit upon all the other parts of the UK.

The UK has been one of the 60 signatories on a Venice Commission document, "Code of Good Practice on Referendums" (2006). Section 2.3 stipulates that "there may sometimes be grounds for taking into account the specific circumstances of national minorities... a double majority of electors within that territory and throughout the country may be required"1.

If Wales, Scotland and Northern Ireland were negatively impacted by a proposed constitutional change, and every single person in those countries voted against it, the total votes in mid-2016 would have been 10million. All three of those notions can be overridden if only 10% of England votes for the change. This is clearly deeply undemocratic and it is what Section 2.3 of the Venice Commission's document is designed to protect against1. The solution is that the result is only enforceable if each of the UK's four nations approves.

3. UK Citizens Do Not Know Enough About the EU

Of all EU countries, it is the UK's citizens who are the least knowledgeable about the EU (the most well-informed are those in Slovenia, Luxembourg and Croatia)2. Humorously, data released by Google shows that ... well, the Washington Post's article on it summarized it the best: "The British are frantically Googling what the E.U. is, hours after voting to leave it" (2016 Jun 24). The UK has suffered from many high-profile long-term campaigns ran by sensationalist newspapers3,4 that have managed to misinform the masses on almost every aspect of EU involvement with the UK.

Only in the 2016-2019 period has the UK relearnt substantive amounts about the depth of its reliance on international trade, of which the vast majority passes through the EU. Leaving the EU in most cases still means having to follow EU trade rules, but, on much worse terms than before. This was not appreciated by the majority in the 2016 referendum.

When the UK signed the Venice Commission document, "Code of Good Practice on Referendums" (2006)14, it endorsed a clause about the clarity of referendums, found in section 3.1 clause (c). Here is

“The question put to the vote must be clear; it must not be misleading; it must not suggest an answer; electors must be informed of the effects of the referendum; voters must be able to answer the questions asked solely by yes, no or a blank vote.”

"Code of Good Practice on Referendums" by Venice Commission (2006)6

The Remain vote was clear, as it was in 1975 referendum. To Remain means to continue be part of the "ever-closer union" of the EU. But there are multiple ways to Leave, and several "models" on which a European country could interact with the EU. For an island completely reliant upon EU trade and EU access for transport, logistics, commercial flights, importing and exporting, the nature of the post-Brexit deal is of utmost importance. The vast majority of the Leave campaign was based around debates over what forms of deal the UK may have with the EU.

The problem stems from the fact that the referendum did not specify what kind of Brexit the electorate wants. There is a huge and essential difference between a no-deal situation and the various deals. Since the vote, the extreme isolationists that advocate a no-deal Brexit have used the referendum to claim that a "no-deal Brexit" is what was implied by the referendum, whilst the "deal-only" camp point out that the Leave campaigns all marketed themselves on various deal-scenarios and specifically avoided no-deal results from their analysis.

Therefore, it is essential to know what, exactly, the public want from Brexit. However, the referendum does not provide this clarity, and didn't satisfy clause 3.1c of the Venice document on referendums. Because of this, any argument based on the referendum lacks evidence without the execution of additional large-scale opinion polls.

Aside from the "must be clear" element of 3.1c, the other factor is the "informed of the effects of the referendum". It has become painfully clear that the UK did not understand the depth of its own trade, border, industrial and economic agreements with the EU, and has been caught out by several serious revelations on the requirements of EU trade for medical, industrial and financial products which form the majority of the UK economy.

After a few years of desperate debate and fact-finding, it only seems that in 2019/2020 it is likely that the UK has re-appreciated the importance of Northern Ireland's border agreement for the peace process and other issues, and therefore, only now would it be possible to hold an informed referendum where the effects are (better) known.

The UK population did not have enough realistic information about the EU to make an informed decision on whether they should vote Remain or Leave. The UK's citizens are the least knowledgeable about the EU out of all its members2 and has suffered from many high-profile long-term campaigns ran by sensationalist newspapers with anti-EU agendas and little regard for balanced reporting3,4. Of those who voted in the Brexit vote, 70% of those with the worst education voted to Leave but amongst those with degree level education or higher, only 32% did15. The reason for this is that Brexit relied on short-sighted one-liner slogans, which appealed to the uneducated. Only now, in 2019, are there signs that we are beginning to tackle the details. At some point soon, it will be the right time for a referendum.

The Leave Campaign Director Dominic Cummings admitted in 2017 Feb that the public voted to exit the EU as a result of lies and misinformation5. The UK's House of Commons has found that the Vote Leave campaign involved "serious breaches" of campaign law8, especially "in their use of social media"7, and several key campaign groups (i.e. UKIP) were funded by Russian-interest groups. Likewise, anti-EU campaigners in the USA donated significant time and effort to the Leave campaign - contributing an equivalent value of millions of dollars - especially with regards to Steve Bannon and Arron Banks9. The illegal activities of Cambridge Analytica influenced an uncountable number of people with targeted misinformation, based on data obtained from a Facebook data breach. Vote Leave intentionally broke electoral law during its campaign when it donated hundreds of thousands of pounds in order to get around campaigning spending limits10 and Leave.EU has also been found in the central London county court of committing four electoral offences during their own campaign10. The online advertising gained through illegal overspending influenced "tens of millions" of people, and statistics show that it directly led to over 800,000 people changing their minds11. These illegal elements skewed the Brexit vote, made it invalid, and damaged UK democracy. The Remain campaign was more honest but it was very sparse, and the mass media chose to only pick up on the disreputable "project fear" element (knee-jerk claims that painted an unbelievably dystopian future if the UK left the EU). In total, the entire debate was poor quality and "a distinctly unpleasant affair"16 and lacked the calm rationality required for a referendum.